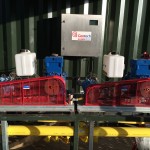 Mixing the digester contents using minimal unconfined chaotic gas, mixing with a very low parasitic electrical load, 1-2 watts per m³ of digester capacity. A typical mechanical mixing system will use at least 10 times or more. This is vital to maximise biogas production for the export of electricity and the full treatment of slurries and other feedstocks, with no moving parts in the vessel (except for the de-silting arm). Now the only reliable and accepted British way to keep digester contents mixed and sand and silt free.

Unlike the Continuously Stirred Tank Reactor (CSTR), or semi plug flow designs, the Farm Gas Power system allows for a more complete digestion process through controlled “gentle” mixing so causing stratification of the contents, only the digested liquor is drawn off, while allowing the process to continue digesting more of the solids without creating a crust on the surface, this will increase gas production with a more complete digestion. The system is a vertical plug flow as opposed to a horizontal type.